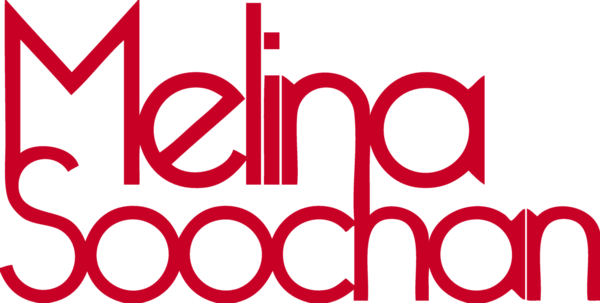 Covid Pandemic and An Artist's Life

It all started in Oct 2020 when the 2nd lockdown was announced in Montreal and everyone and everything was cancelled for the second time. As a musician who lives primarily on gigs and live shows, this was a devastating second blow. By then, I was mentally checked out and just wanted to get away from it all. So I came up with an idea...

I put together a 7-piece band consisting of excellent musician-friends from Montreal who were all in the same boat as me (we called ourselves"The Audio Embassy"), and I booked us for a 2-week work-vacation to the Club Med in Cancun, Mexico. We left on Dec 19, 2020, and planned to stay only for the holidays. Playing music, in the hot Mexican sun, for the Holidays and New Year's Eve, sounded like paradise! 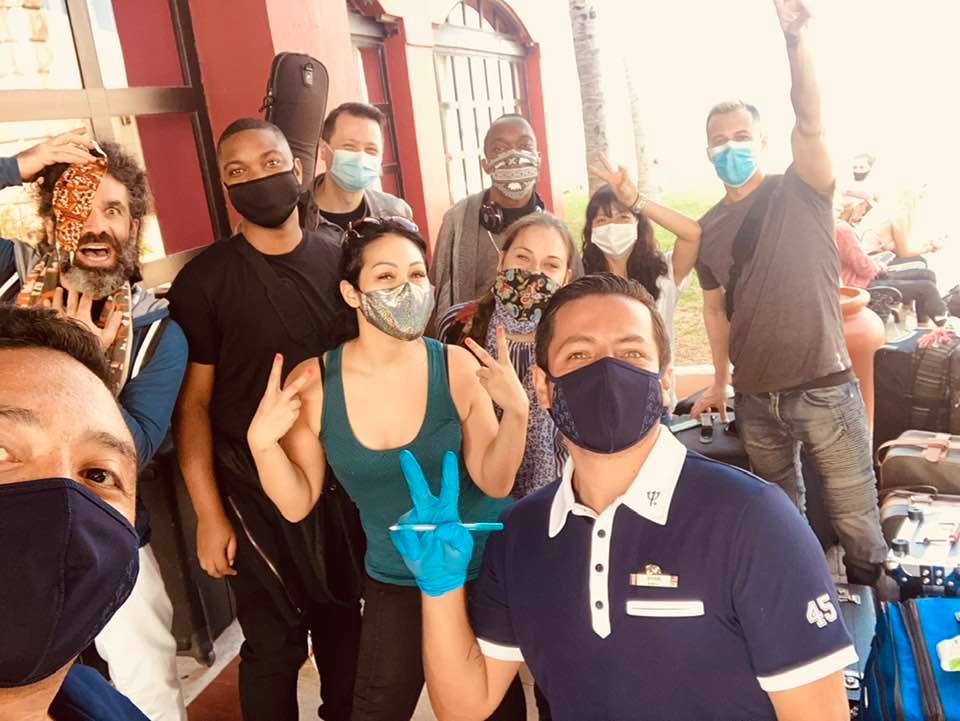 In order to prepare for this trip, we were holding "illegal" rehearsals in my home in DDO (at the time because of Covid , people were not allowed to visit the homes of others, and neighbours were being actively encouraged to call the cops on each other). But we were very careful, creating a little bubble of our own, and eventually, when the time came, we finally got out to Mexico. At the time, the only requirements were washing hands and wearing a mask at the airport and upon arrival. In the Club Med resort itself, the entire resort was considered a bubble. Each family or group travelling didn't have to wear masks between themselves, only when going to the restaurants or other public indoor spaces. Many of the Club Med activities had been modified to accommodate the new Covid rules, such as holding all group activities outdoors, having outdoor parties, closing the bars early, more spacing between tables in the restaurants, etc.

We were scheduled to return home on Jan 6th, 2021, but then Quebec announced its famous 8pm curfew. Myself and one of the other singers I was with, Dano Peace, also from Montreal, decided to extend our travels instead of return home. So we continued as a musical duo to another Club Med, this time in the Dominican Republic. We called ourselves "The Ambassadors Duo". At the time, the Dominican Republic had an even earlier curfew, 5pm on weekdays, and 12pm on weekends! But vacationers and workers in the Club Med resorts were considered a bubble and did not have to abide by those rules. So as long as we stayed in the Club Med, life continued as usual with some minor modifications. Our shows continued to feed our souls, and even though we actively turned our backs on the CERB while we were away, we preferred to make less money but be able to play music over all other considerations. Reckless? Perhaps. But our artistic souls needed it. 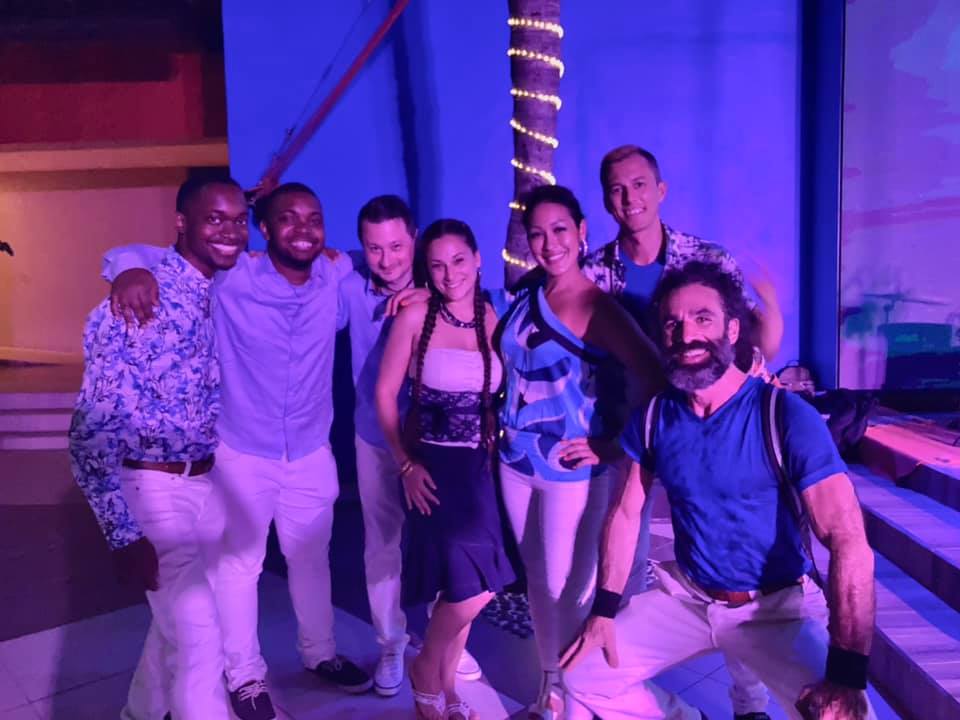 Then, due to the growing discontent with the curfew and all the other ongoing Covid restrictions that seemed to have no end in sight, the band actually came BACK and joined us in the Dominican Republic mid-January! We were all so happy to be re-united in the sun, and performed once again as the band "The Audio Embassy". We were scheduled to stay in the Club Med until the end of Feb. Then, in early Feb, Canada announced it was closing all airlines to the Caribbean and Mexico. The last recon plane to bring all Canadians back home from these regions was to be Feb 6th. In addition, in order to further dissuade travelers from going down south for Spring Break, the infamous $2000 hotel quarantine for all returning travelers was to be implemented starting sometime in Feb. Of course, this heavy financial threat frightened the rest of my band-mates enough to cut their 5-week trip short to 2 weeks, and they returned home ahead of schedule.

However, Dano Peace and I continued on our path of adventure . We tried to remain in the Dominican Republic, but the Club Med didn't want any Canadians (or French) to remain behind, because then they would be forced to keep us if there was no way to return home to our countries. At the time, Canada was following closely the same restrictions as France. The Club Meds suffered quite a bit during Covid and many of their resorts all over the world closed down entirely, due to the fact that their clientele is mainly French from France and Canadians (Quebecois). So, we got essentially told to go back home and that they couldn't do anything to keep us. 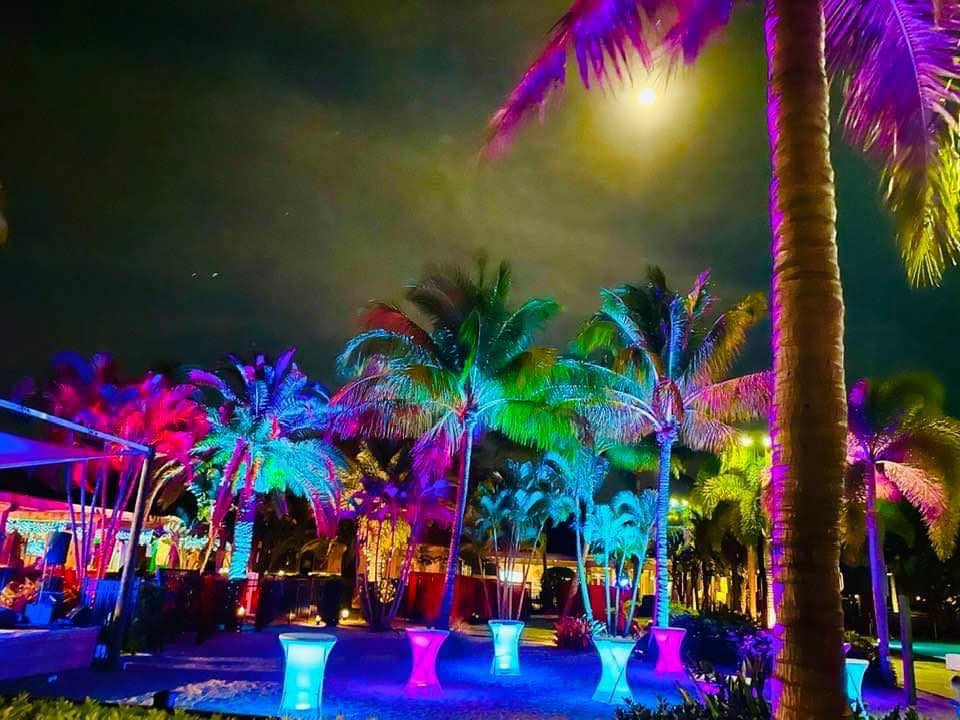 But then, miracle of miracles, the booking agent told us that the Club Med in Florida, USA, had an opening! Since their clientele is all American and they don't rely on European travelers, they were going to stay open. Hoorah! So Dano and I continued on our adventure to Club Med Sandpiper in Florida, where we remained for 3 months. We performed as "The Ambassadors Duo" for the remainder of the winter and spring, until May 1st. At the same time, I was supporting myself through online piano lessons, which I had already started doing since the very first lockdown in Montreal. The online format has been a life-saver for me! Allowing me to travel and teach at the same time. I am grateful to the students that stayed with me during Covid and all my wacky travels! In addition, my home in DDO was constantly rented out on AirBnB, mainly to international travelers that had to isolate themselves after the hotel quarantine for the remaining 2 weeks before going to their final destination, another fortunate opportunity I grabbed! Thanks, Covid ..! 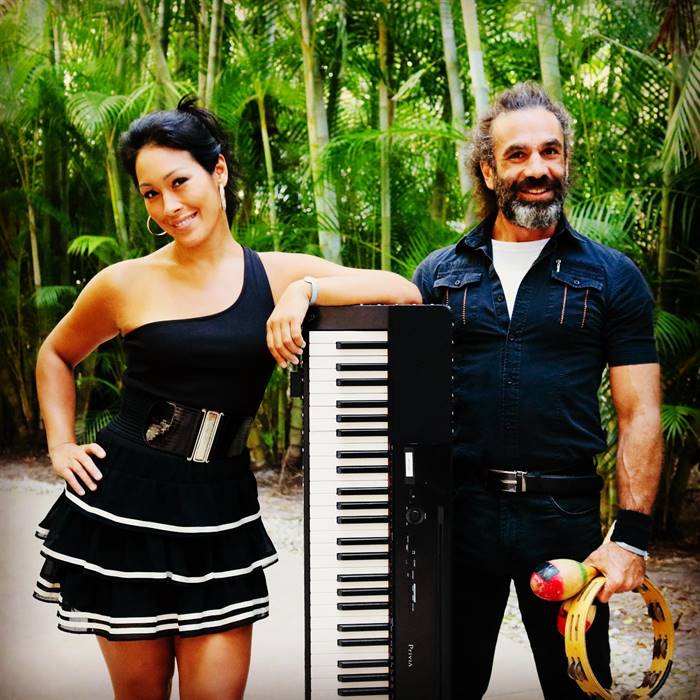 While we were in Florida, I started visiting the bigger cities, renting a car and going out to meet musicians, booking agents and music venues in Miami, Fort Lauderdale and West Palm Beach. I had actually never spent that much time anywhere in the world outside of Montreal for that long (except for 5 months in South Korea back in 2017, but that's another story!), so it was all-new territory to me. What I saw blew my mind! First of all, Florida was entirely open, business continued as usual, and the music scene was thriving. Best I've ever seen even, even during a pandemic, and even compared to Montreal pre-pandemic! I had heard that in Florida there had been plenty of numbers of cases, but from the looks of things down there, you wouldn't have known that a pandemic was even taking place. Many of my well-meaning friends and family back home were much more concerned for me and my safety than I was. But of course, I took many precautions myself! Keeping a mask on, washing hands, and social distancing. 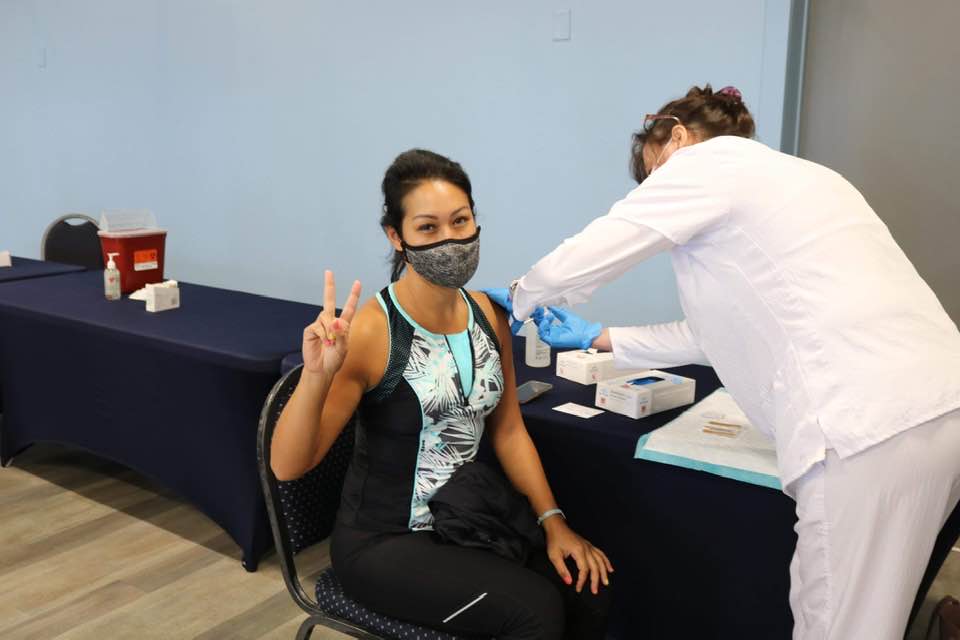 Getting vacinated in Florida

I should also mention that a mobile vaccine clinic came to the Club Med I was staying in back in April and offered free vaccines (Pfizer) to anyone who wanted them. I was the first to line up! With the 2nd dose exactly 3 weeks away from the first. Here I am, getting fully vaccinated, on the recommended schedule, without even being a US citizen and for free, while my own parents who are in their 60s didn't even get their first dose and had to wait 4 months for their second. I felt very fortunate to have that opportunity and grabbed it!

On May 1st, my colleague Dano Peace ended up going back home to Montreal, but I decided to stay on my course of adventure . Although Montreal was soon starting to open up, the hotel quarantine requirement was still active and I wasn't ready to throw in the towel yet, knowing it was going to be an uphill battle to get back into the swing of things in Montreal. So I stayed in Florida for another 3 months. I rented a tiny little guest house in the backyard of one of my booking agents on a month-to-month basis. When I say tiny, I really mean tiny! But it was all I needed. I decided to buy a car, to avoid having to rent one every week, I bought whatever equipment I was missing, like speakers and mics, and I met with several agents who immediately booked me on a variety of shows in the area. Hotels, restaurants, private events, yacht clubs, pool bars, you name it! My type of music, as a solo pianist-singer in pop, jazz and soul/rnb, worked very well in those areas. Plus I had all the equipment I needed. I had been traveling this whole time with my trusty Privia keyboard, it was like the Nokia of keyboards. It was indestructible, having survived a torrential rain, falling down a flight stairs, and even falling off stage once! Still works to this day.

I stayed in Florida for yet another 3 months, spending my time performing, teaching virtually, checking out shows, going to the beach, discovering new areas, meeting new musicians, and even doing a road trip to New Orleans and back.I left my rented guest house on Aug 1st. Since I had bought a car, I decided the best way was to drive back to Montreal, Canada. And so, road trip it was! Passing through Virginia Beach, Myrtle Beach, New York, and more! I documented pretty much every step of the way on Facebook. It was exhilarating to be traveling alone with only myself to rely on, on the open road! It took me 5 days, but mostly because I was taking many breaks and not driving at night, and stopping to sight see along the way. 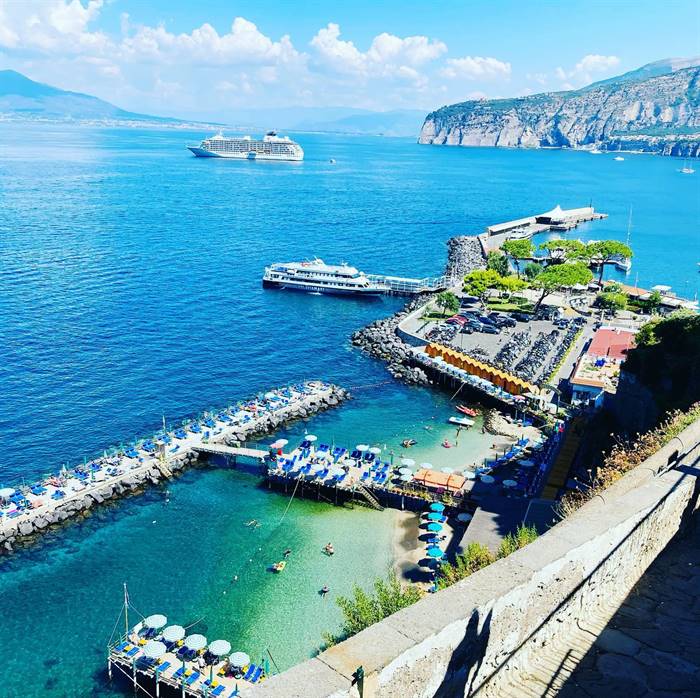 Contrary to popular belief, I actually was home in Montreal for a few days in early Aug. But then, thanks to my vaccine I had already received, I got booked on yet another international musica lopportunity, to play music on a very exclusive cruise ship in the Mediterranean Sea! The itinerary of this ship went from Greece (Piraeus and Milos), to Croatia (Dubrovnik and Korcula), to Italy (Otranto, Sorrento, Rome and Portofino), to France (Nice) and finally to Spain (Barcelona). I went as a duo with guitarist-singer Adam Goulet, also from Montreal. The Covid measures on board the ship were very strict, including PCR tests at least twice a week, masks when disembarking at the ports, hand washing, temperature at every doorway, proof of vaccination papers had to be on hand at all times (absolutely everyone who worked or stayed on the ship had to be vaccinated with one of the 3 major brands: Pfizer, J&J, Moderna). 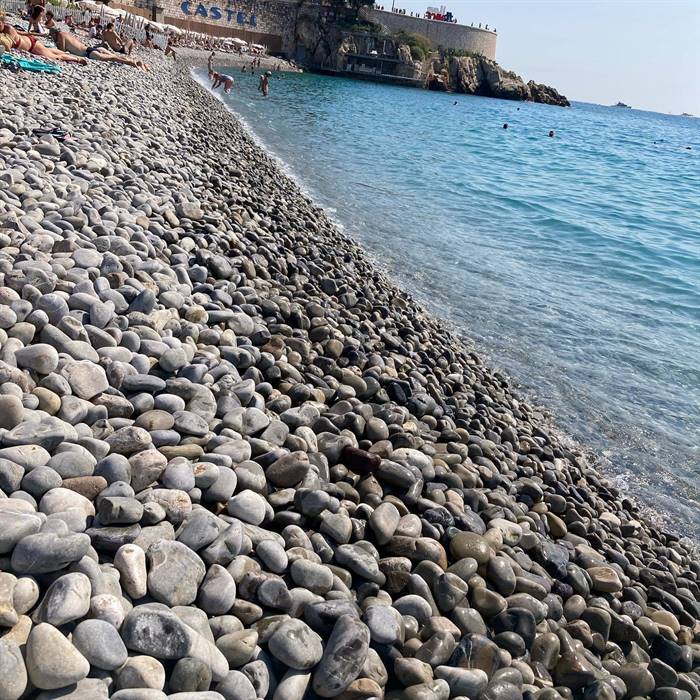 For each country we entered, we had to fill out an online Passenger Locator Form which included our personal information, image of the proof of vaccination record, and an additional negative PCR test performed by the country's own doctors who came on board to swab us. The sanitary measures were quite complete and involved, but made us all feel very safe. In France, they had the QR code called le Passe Sanitaire, similar to Quebec's Vaccination Passport. Restaurants, bars, museums, and public areas generally required it. Guards would scan the QR code at the entrances to these places. It wasn't a hassle at all. But of course, like it is in Montreal at this time, there are plenty who oppose it. I even saw an anti-vaccine passport protest happening in Nice on the day we arrived! The very next day was the Nice Ironman competition, which required that very passport for participants and for viewers on the official grounds of the event, which took place along the beach of Nice.

I came home on Sep 15, 2021, back to Montreal, after 9 months of international travel! Thanks to my musical endeavours and, in a way, thanks to Covid , this was all made possible! Hopefully it won't take any other type of pandemic to get me to travel again :) I assure you, there are many more countries I'm looking forward to visiting, pandemic or not, there's always a way!